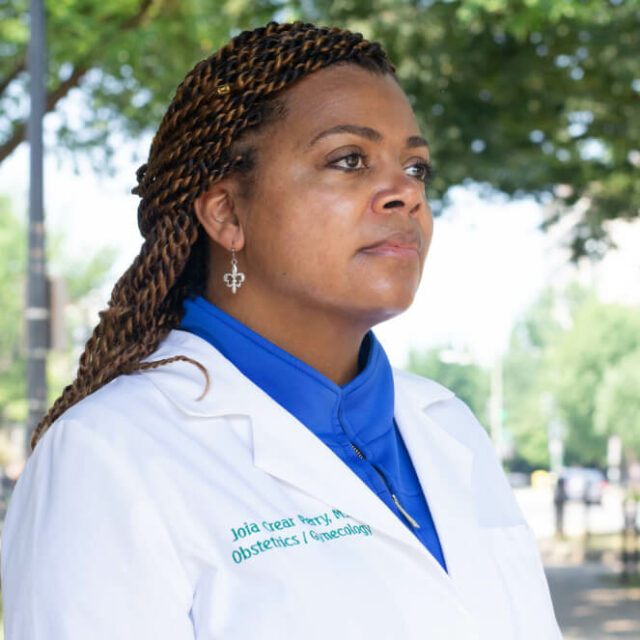 Dr. Joia Crear-Perry is a physician, policy expert, thought leader, and advocate for transformational justice. As the founder and president of the National Birth Equity Collaborative (NBEC), she identifies and challenges racism as a root cause of health inequities.

She is a highly sought-after trainer and speaker who has been featured in national and international publications including Essence and Ms. Magazine. In 2020, Dr. Crear-Perry was honored by USA Today in its “Women of the Century” series and featured on ABC Nightline’s “Hear Her Voice.”

Dr. Crear-Perry has twice addressed the United Nations Office of the High Commissioner for Human Rights to elevate the cause of gender diversity and urge a human rights framework toward addressing maternal mortality. A proud recipient of both the Congressional Black Caucus Healthcare Heroes award and the Maternal Health Task Force at Harvard University Global Visionary Award for Commitment to Advancing Women’s Health, Dr. Crear-Perry’s most notable efforts include the removal of race as a risk factor for illnesses, including premature birth.

Previously, she served as the Executive Director of the Birthing Project, Director of Women’s and Children’s Services at Jefferson Community Healthcare Center, and as the Director of Clinical Services for the City of New Orleans Health Department. In that role, she was responsible for four facilities that provided health care for the homeless, pediatric, WIC, and gynecologic services within the New Orleans clinical service area.

Dr. Crear-Perry has been celebrated for her work improving the availability and utilization of affordable health care for New Orleans citizens post the Hurricane Katrina disaster of 2005.

Dr. Crear-Perry testified before the House Energy and Commerce Committee as the Democratic witness in support of the only Maternal Health Bill signed into law under the Trump administration. She has received funding from the Robert Wood Johnson Foundation (RWJF) to work with the American College of Obstetrics and Gynecology (ACOG) and develop a Standard for Respectful Maternity Care. She also serves on the National Quality Forum Maternal Mortality and Morbidity Committee and the Joint Commission Perinatal Safety Project Technical Advisory Panel.

Dr. Crear-Perry currently serves as a Principal at Health Equity Cypher and on the Board of Trustees for Black Mamas Matter Alliance, Community Catalyst, National Clinical Training Center for Family Planning, and the UCSF PTBi. She is an Adjunct Professor at Tulane School of Public Health.

She is married to Dr. Andre Perry and has three children: Jade, Carlos, and Robeson.

Her love is her family; health equity is her passion; maternal and child health are her callings.